While OnePlus built its brand around budget flagships and climbed the ladder to plumb the premium segment, it hasn’t completely abandoned its budget play. With the Nord lineup capturing the mid-range segment, OnePlus came out with the R series last year, with the OnePlus 9RT as a follow-up to the OnePlus 9R, earlier this year. It was the first OnePlus smartphone to launch this year, amid a huge controversy surrounding the company’s merger with its parent brand, Oppo. The good thing is, the phone still has the charm of the OnePlus of yesteryear, and with some nifty additions, makes for a great smartphone for budding gamers and power users.

I’ve been using the OnePlus 9RT as my daily driver for quite some time now, and this is a long-term review of the budget flagship, following the launch of the OnePlus 10 Pro and the upcoming 5G spectrum auction in India. . Under the Snapdragon 888, the phone is still very relevant, providing stable, fast and smooth performance, but the cameras leave a lot to be desired. In its defense, the OnePlus 9RT is not a camera flagship, packing the usual components seen in high-end smartphones. It’s geared for performance, especially in games, and there, even four months after its release, it’s still a compelling option. Here is our review – 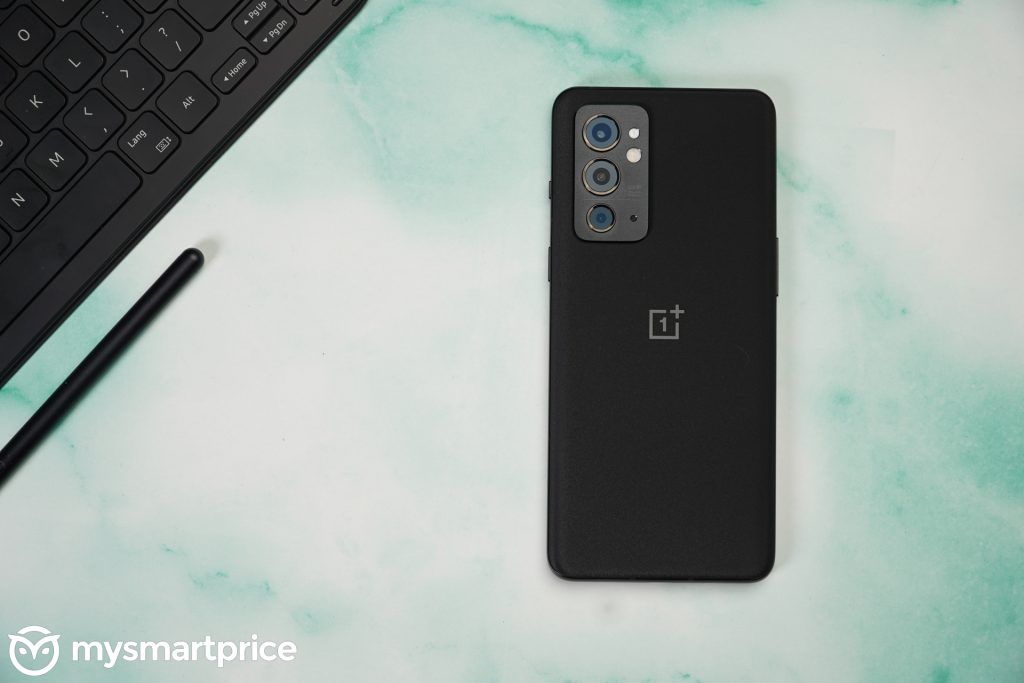 The OnePlus 9RT, after the OnePlus 9, outperforms the OnePlus 9R, thanks to a redesigned camera module. Our review unit had a matte black finish with shimmering particles in the back panel. It both looks good, and feels smooth in the hand, almost tempting you to use the phone without a case. Even if you have Gorilla Glass 5 on both the front and back, it’s a risky proposition. The good thing is that you get a matching rubber case in the box, which has a rail and a grippier finish. I dropped the phone a few times during my long usage, but thankfully no damage was done. 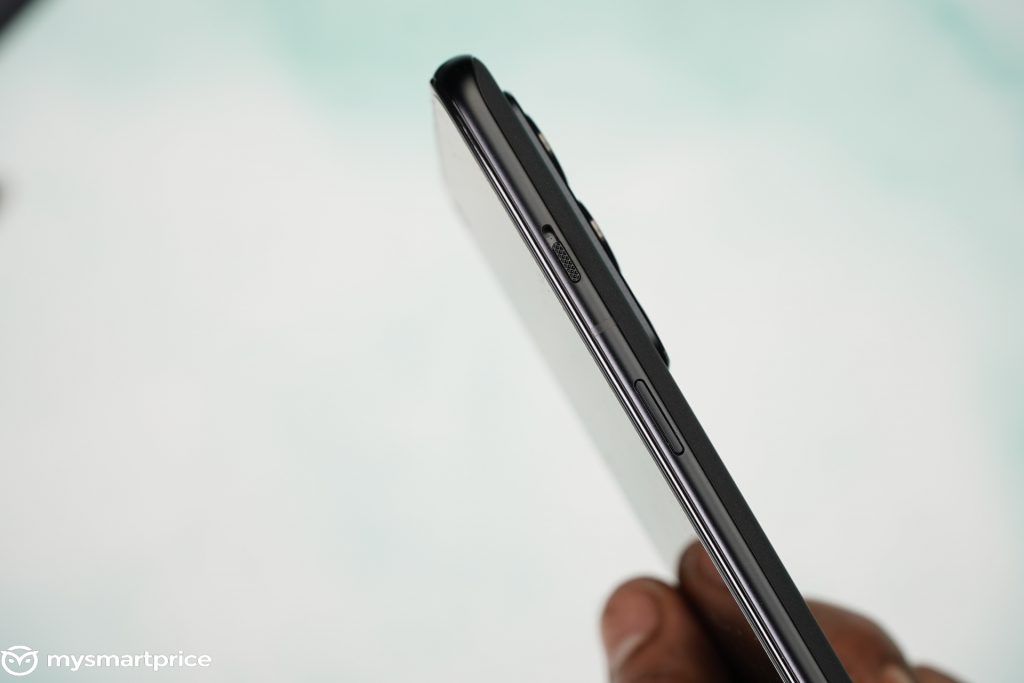 Other components commonly found in OnePlus phones are present. Stereo speakers, alert slider, power and volume buttons on the opposite end and a punch-hole selfie camera. It is a flat-screen smartphone with minimal side bezels and equally less on the top and bottom. One improvement I noticed is that the in-display fingerprint sensor is now located much lower on the screen, making it much easier to reach and unlock than the OnePlus 9R.

The phone comes in a tall, red box, in which you’ll find a Warp Charge 65T charger, a USB-A to USB-C cable, manuals and documents, and a matte black case. It weighs around 198 grams, but due to the even weight distribution, it doesn’t feel too heavy in the hand. The redesigned camera module makes the phone look much classier and frankly, I found it to be one of the best designed OnePlus smartphones in a long time. 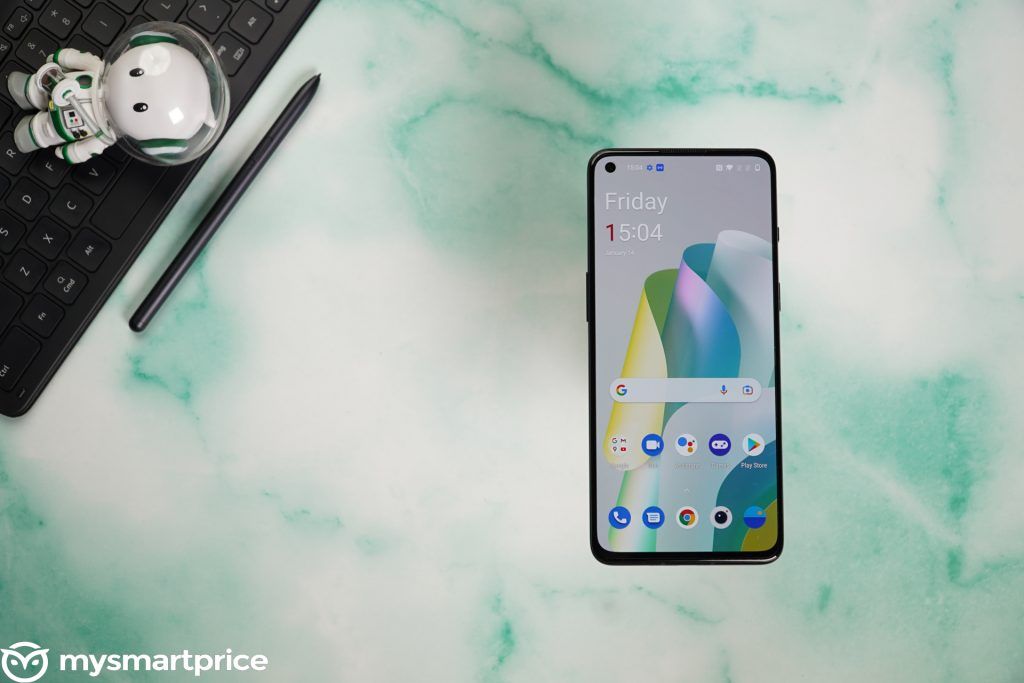 The OnePlus 9RT features a 6.65-inch AMOLED display with a 120Hz refresh rate and 1080p resolution. It’s essentially the same display as the OnePlus 9R, but supercharged with a higher touch-response rate that helps with gaming. It’s not an LTPO panel like you get in the Pro series, so it won’t dynamically change the refresh rate like they do. The refresh rate remains constant at 120Hz, which can drain the battery, but on the flip side, it keeps the experience consistent at all times.

The OLED panel is a fairly capable display with high sharpness and color saturation. There is a slight blue bias if you’re looking at a white background, but you won’t notice it. Peak brightness could be slightly higher to make it more legible in direct sunlight.

Audio output is very good and the stereo speakers are louder than its predecessor, but only by a hairline. You get a good channel separation which comes in handy when gaming, and it’s usually loud enough to watch YouTube videos with the ceiling fan on.

One big change in the OnePlus 9R is the inclusion of the Snapdragon 888. Last year’s OnePlus 9R came with the Snapdragon 870 which was modeled around the Snapdragon 865, so the 9RT is an expected generational improvement in performance. It’s also impressive that OnePlus has used a large vapor chamber cooling system to reign in the Snapdragon 888 inch and prevent overheating. There is support for around 8 5G bands and three Wi-Fi antennas, and here the latter is actually more useful, especially when gaming, as you usually cover the antenna with your palm when gaming in landscape orientation. In this case, there is an additional third antenna on the side, which remains intact and provides seamless connectivity.

Sadly, for a phone launched in 2022, the OnePlus 9RT still runs on OxygenOS 11.3, based on Android 11, and four months after its launch, there’s no sign of Android 12. That might actually be a blessing for OnePlus users who are used to the OxygenOS experience, as since Android 12, the codebase has been merged with Oppo’s ColorOS and there are a lot of UI changes that may not be familiar to earlier users. The 9RT’s UI has almost no bloatware, and animations are crisp and fast, giving the impression of high-speed usage.

Like all OnePlus flagships (Budget or otherwise), the OnePlus 9RT feels blazingly fast from the moment you unlock it. The fingerprint sensor is quick to register and you’ll be instantly taken to the homescreen. There’s also face recognition which works faster than the fingerprint sensor, so you won’t be able to use it much. There is no lag in switching between apps, and apps launch instantly and rarely become slow and sluggish even after opening a few apps in the background.

The phone is meant for gaming and games like COD: Mobile, BGMI and PUBG: New State ran without a hitch. The cranked up touch response rate makes playing online games on it fun (Almost 600Hz in some games), and haptic feedback. It barely warmed up even after long sessions, boding well for the power-hungry Snapdragon 888. The OnePlus 9RT packs the same 50MP Sony IMX766 camera as the OnePlus 9 and 9 Pro, which is an upgrade from the camera system on the OnePlus 9R. The company claims improved low-light performance, with the sensor having the native ability to capture HDR footage. But only the primary camera is different. The 16MP ultrawide camera is the same as the OnePlus 9R, and there’s also a 16MP selfie camera. Only, the 2MP macro camera is a downgrade.

The camera app itself is lifted straight from Oppo’s ColorOS, marking a sharp departure from the old aesthetic. But it has all the features including AI enhancement for both photos and videos, portrait videos, long exposure and the likes.

The camera does well for capturing images during the day. If you have AI enhancement turned off, colors will look a little washed out, but with it turned on, colors will look very saturated. Shots have enough detail, however, and dynamic range is good enough to brighten up dark shadows.

Since there’s no zoom lens, you have up to 10X digital zoom, where photos come out decent enough knowing they’re being digitally cropped. Shoot at a maximum of 3X for best results.

An ultrawide camera widens the perspective, but brings down detail. It is good enough to use when there is enough light, especially during the day, but not too much light after sunset.

In low light, the primary camera works best and is adequate for the price. Night mode is faster than other smartphones and brightens the scene to a high degree, sometimes a little too much. But it also does a good job of extracting detail from near darkness. Ultrawide camera in night mode is not very useful. There’s too much noise and not enough light despite multi-frame processing.

For videos, you get the option of 4K 60FPS, where the output looks sharp and crisp. Native HDR does well to reduce exposure clipping in subjects. There’s also a portrait video mode that isn’t the most accurate at blurring objects, but unfortunately no night mode video.

The OnePlus 9RT packs a 4500mAh battery that easily lasts all day with moderate usage. In my usage, the screen-on time varies around 6-7 hours which is quite decent for a Snapdragon 888 smartphone. Heavy usage like heavy scrolling on Instagram, playing games will drain the battery quickly, but the 65W Warp Charger is very handy. It can do a hundred-one in 30 minutes, which is as good as some of these 120W fast charging smartphones.

Should you buy the OnePlus 9RT?

The OnePlus 9RT retains many of the features and themes that earned OnePlus its fierce following. It is a performance flagship and is optimized for speed and gaming. You get a reliable display and long-lasting battery, and decent enough camera performance. It offers better value than the OnePlus 9R, and even the OnePlus 9, but it’s a little late to the party. Till February, you had iQOO 9 SE, Mi 11T Pro and more recently, Realme GT 2 Pro with Snapdragon 8 Gen 1, all in the sub 50k price range. So while there are plenty of options out there, buy the OnePlus 9RT for the best ‘Ol OnePlus Charm.