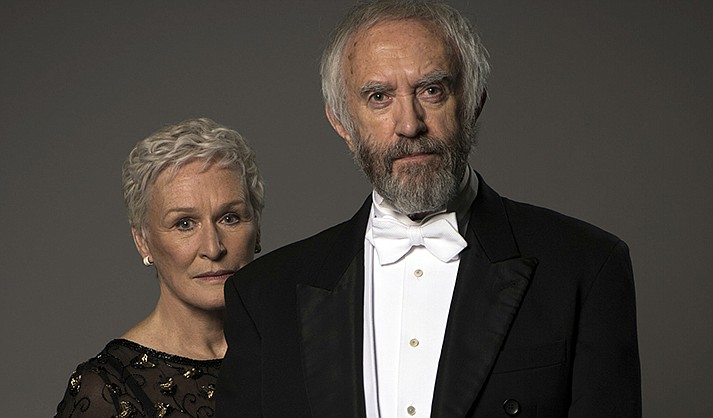 ‘The Wife’ features an award-winning all-star cast including eight-time Academy Award nominee Glenn Close and Oscar nominee Jonathan Pryce. Glenn Close was nominated for an Academy Award for Best Actress in a Leading Role for this film. (Photo provided by SIFF)

Monday Movies on Men” continues Nov. 21 with the Cottonwood premiere of “The Wife” at 7 p.m. at the Old Town Center for the Arts.

After nearly 40 years of marriage, John and Joe Castleman (Glenn Close and Jonathan Pryce) are complementary. Where Joe is informal, John is elegant. Where Joe is vain, John is self-effacing. And while Jo enjoys her more public role as the Great American Novelist, Joan brings her considerable wit, grace, charm and diplomacy to the private role of the Great Man’s wife.

Joe’s literary star has risen ever since he and Joan first met in the late 1950s. On the eve of Joe’s Nobel Prize for Literature – the crown jewel in a magnificent body of work – John’s coup de grace is to confront the greatest sacrifice of his life and the mystery of his career.

Close was nominated for an Academy Award for Best Actress in a Leading Role for this film.

“The Wife” intertwines the story of the couple’s youthful passion and ambition with a portrait of their marriage, thirty years later – a lifetime of compromises, secrets, betrayals and mutual love.

Tickets are $12 general admission and $9 for Film Festival members and $10 for students. Movie concessions will be available, including beer, wine, soft drinks, water, popcorn and a selection of movie candy.

For tickets and more information, please call 928-282-1177. Tickets can be ordered in advance online at SedonaFilmFestival.org.

Old Town Center for the Arts is located at 633 N. Fifth St. (just off Main) in Cottonwood.